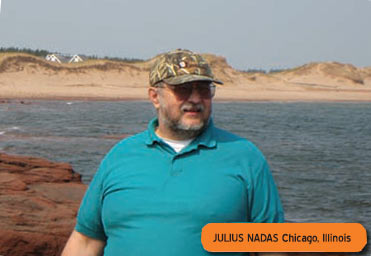 JULIUS NADAS is a 62-year-old professor at Wilbur Wright College. He has taught there since 1976, and lives on the northwest side of Chicago, Illinois, about five miles from campus. He has been battling high pressure through cycling for the past two years.

When did you start cycling?
I come from a family of poor immigrants. My father was 45 years old when we came to this country and we really didn't have any money for toys. I must have been around 12 years old when I found an old bicycle that had been thrown out in the garbage. The wheels didn't have any tires, the fork was slightly bent, and it didn't have any brakes. I taught myself how to ride on that poor excuse for a bicycle, going up and down the alley behind our house in Cleveland, Ohio. I don't remember having a real bicycle, with tires and brakes, until I was a graduate student in Madison, Wisconsin. Starting then, for the past forty years, I have always had a bicycle which I used both for recreation and commuting.

What is a day in your bicycling life like?
Several years ago I bought a motorcycle. I though it would give me the same benefits as bicycling except that I would also be able to visit my grandchildren in Wauconda, about fifty miles from where I live. This is a trip I would not do on my bicycle, since my longest rides have been half that far. The motorcycle was so much fun that I found myself taking it instead of the bicycle for more and more trips. By last year I had rationalized myself into taking the motorcycle to school on a daily basis instead of the bicycle.

Then my doctor laid some pretty strong words on me—he said that my BMI was obscenely obese and my blood pressure reading (190 over 110) wasn't so good either. Of the two, he felt that the blood pressure was more of an immediate threat to my life and that he was going to have to put me on some kind of medication to bring it down. I walked out of his office telling him that I would first see if there was something else I could do before I resorted to medication. I got back on the motorcycle to go home—when I got there I decided not to ride it again until I brought the blood pressure down. In a few months, my readings were back in the 140 over 90 range and I am now allowing myself one motorcycle ride a week.

Do you recommend cycling to others? Have any taken you up on it?
My children were all given a brand-new bicycle for their graduation from grade school. Some of them have ridden more than the others, but none of them ride as much as I ride. My wife also rides occasionally.

What kind of bike are you currently riding?
Since I weigh around 300 pounds, I only ride very heavy-duty bikes. My dealer thinks that the ideal bicycle for me would be an off-road tandem that has one of the seats removed and the frame shortened. I currently ride a front-suspension, all-terrain mountain bike with super-strong wheels and front and rear disc brakes. Of course my seat is a wide, padded, cushioned job because gel seats don't last under my weight.

What's the best part about cycling?
I used to think that the feeling of freedom was the best part; now I think it is that and the health that bicycling gives me.

What's the worst?
From my perspective there is no downside. Of course, one of my colleagues got doored last fall and I've been hit twice by cars, but it could also happen to me on a motorcycle. I just try to be very careful and ride defensively.